As is becoming tradition, a busy few days! After the day in Hue’s imperial city, I went to visit a number of the emperors tombs nearby. Bloody hell, they know how to build them!! Giant bronze statue of themselves, an entire underground palace (which no one will ever see) huge marble obelisks bearing down on he horizon. If they still had an emperor, they’d be broke (the last emperor stepped down & gave power to Ho Chi Minh, who’s tomb I’ll visit tomorrow) 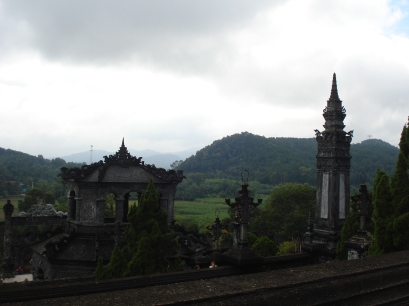 The following g day it was a total 12 hours on a bus round trip to see the newly discovered ‘Paradise cave’ Its impossible to do justice the the scale and awesomeness of that place, its like stepping back in time 400 million years (age of the cave) and its set in a magnificent national park. Really, really didn’t do the place justice in a few hours and plan to return in the future, however the time is starting to run short now and I had another flight to catch. 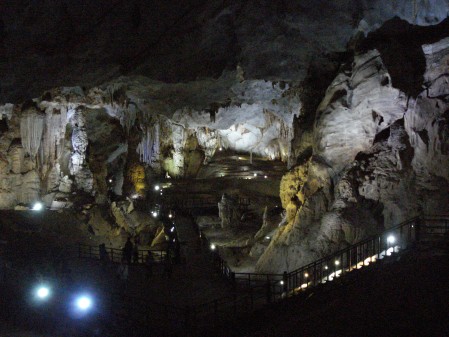 Rather than spend new years eve on a 13 hour overnight train journey I took short hop back to Da Nang to grab a flight to Hanoi (the details of this are a whole other story I’ll explain in the future) but so glad I did, the train track hugged the coast the whole way & the scenery was spectacular (I met one couple doing the trip specifically for those views!!) Minog disgruntlement is as I fell foul of the airport carry-on baggage weight at check in so am now, less a hammock, shirt, towel, fleece, some & toiletries lighter and went through security wearing 3 shirts. Still, the cleaning lady at the airport (who had been watching me with some amusement) which I gave all the stuff to seemed very happy with her unexpected windfall. I’m staying in the only hotel I could find at says notice in new years eve in the capital but have massively lucked out as they are part way though a refurb and my room is plush and brand spanking new

🙂 Win. Now a quick shower wer then off to celebrate the new year! Happy new year one and all, it’ll be 7am here once it reaches you guys so please don’t ring me