Sorry to drop another on you so soon but feel today very much merits its own post, plus I’ll be off in the mountains tomorrow and will have no WiFi or 3G so you all get a day off

🙂 The first day of the highly anticipated motorbike tour has finally arrived! So was collected at 8:15 by my excellent guide Hai and whisked through the Hanoi rush hour on the back of a 125cc scrambler to the warehouse with my (and all the other) bikes. I remember thinking “I’m glad I’m not riding in this” (oh how naive I was!!) The warehouse is an absolute treasure trove of awesome bikes (none of which I can name) old us military issue, scramblers, cruisers, sidecars and in the middle pink Minsk. Now I was aware this company I’m travelling with organised the Top Gear Vietnam visit, but I didn’t know they still had the bikes “you want to take it for a drive?” “Fuck yeah!” It was a bit buried in the bike mass and it took some work to get in started, but once it got going it was a brilliant experience….. But it was a fucking nightmare to ride! Clutch was shot and when I pulled up and the clutch brake didn’t kick in, I very slowly crashed into another parked bike. I have crashed the pink Minsk. Thankfully it wasn’t a precursor for the rest of the day and we set off towards Mai Chau, south west of Hanoi. 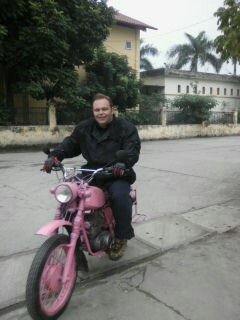 The traffic was kind for started, but the we hit some junctions which I can only describe as gridlocked, solid traffic in every direction and all trying to go at once (as is the custom in SE Asia) Managed to get out in one piece but not before one small bump into Hai (no damage done) and the wing mirror nudged someone’s hand at about 2kph so no drama. A couple more opportunities to practice my emergency stop later we were clear of the city and out on to the far quieter & nice and wide main roads. The surface is great but the bus and truck drivers are mental so you need to keep your ears open for the telltale horn which means “I’m coming through, regardless of whether you move or not” After a quick coffee stop it was onto the country roads, much quieter but the surface jumps between gravel and tarmac with a liberal sprinkling of massive potholes. The scenery is spectacular, like Ha Long bay on land & framed with sugar cane farms! Between these were sprawling paddy fields and villages where the children (and many adults) wave as I’m a real novelty act out there. 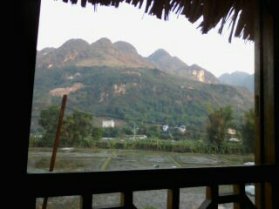 We stopped for lunch at Hoi Binh city, had a fantastic mix of multiple courses (veg soup, chicken & cashew nuts, pork, tofu in tomato sauce) and some chilled lemon green tea. The waitress apparently couldn’t get over how tall I was (???) and on of the guys sitting outside motioned for me to have a boxing match with him (I politely declined) After this and some more smaller roads it was on to the mountain pass, more spectacular mountain scenery mixed with a smattering of cows wandering into traffic & causing chaos, pig butchery at the side of the side of the road and stalls selling mushrooms for ‘medicine’ (the guy behind the stall was smoking what looked like a bamboo bong) Arrived in the idyllic Mai Chau at around 4:30pm and drove along some ‘roads’ (slabs on small platforms) through the paddy fields before arriving at the very agreeable home stay which only has myself & Hai here and provides the amazing views I posted earlier (that’s the mountain pass we rode over in the background) Quick shower and then out for another buffet style lunch full of delicious local dishes. I forget what most of them were called but the pork bbq’d in a leaf was exceptional! Had a beer also, which was handy as I also tried for the first time deep fried grasshopper. It’s very good, but much of what I could taste was still peanuts from the main meal.

After eating headed towards some music I heard which turned out to be a traditional dance show put on for a large group of French Canadian students on a 5 week exchange with the university of Hanoi. Watched this for a while and practice my shoddy French before heading back for an early night, you wont be shocked to learn I’m knackered! Best rest up for tomorrow, it promises to deliver much of the same