Having dealt with British Rail on a bank holiday weekend in the past I was expecting the worst. On the first day of ‘Golden week’, with almost half of China’s population on the move and an estimated 11 million people headed for the same city as us,  surely the train was going to be a cramped, crowded chaotic affair with arguments over seating, unruly children running riot, some business wanker shouting into his mobile all journey and general misery all round. I couldn’t have been more wrong! We (myself and my travel-buddy, housemate & friend Leighton) got to Rui’an train station early to avoid the queues. Too early as it turned out as the station didn’t open till 40 minutes after we arrived. After completing the token security check we headed to the waiting area. It’s worth noting that, as with most things, they don’t mess about in China and when you book a train ticket you have to supply your passport number and visa details (I suspect one of the reasons that crime is so low in China is down to this Panopticon-style social setup) These are printed on the ticket and checked, along with your passport or ID card for nationals, when you go through an airport-style security check complete with bag scanning and pat-down. The waiting area is a huge great hanger of a building full of seats. You can’t head down to the platform until a few minutes before the train pulls in (going through a further set of ticket barriers) and then the carriage numbers are marked on the floor making finding the right area on the platform to wait a doddle. With to the strict ticketing controls mentioned before, the rail company knows exactly how many people are on the train and will only sell as many tickets as there are seats. This might mean that you don’t always get the train you want but it does mean that the trains are full but not the overcrowded, unusable, hellish sardine-inspired nightmare we’re regularly subjected to at home and so you’re never left sitting on the floor by the toilets for hours on end, trying not to gag on the smell of stale piss. The train itself is also something of beauty (and I’m not one to get excited by trains) A long, sleek, futuristic looking white yolk, it easily flies along at over 300km an hour with barely a whisper due to it’s electric power. The ease, comfort and affordability of the train journey (¥147 return, about £15 for a 700km journey) given the Chinese railway is state-owned, is very much a boost for Corbyn’s re-nationalisation argument.

After a brief but crowded trip on the Hangzhou subway system we headed for the Hangzhou Lanshui International Youth Hostel on the edge of West Lake (Hanzhou’s premier tourist attraction and the reason for most of the 11m people descending on the city) The hostel was brilliantly located and the shower was excellent, however the rooms stank of damp & stale piss and the towels (which you had to hire) were so farcically small they were unusable as anything other than a loin-cloth. Still, at under £10 a night in height of the season it did the job as a crash pad but nothing more (I’d recommend paying a couple of quid more and staying at one of the budget Home Inn hotels instead if you have the opportunity)

As we arrived early and the sun was shinning on a glorious day we dropped our bags and, having been chased out of the hostel by the stale piss odour, headed across the road to begin exploring. The West lake is surrounded by parkland and what are dubbed ‘scenic areas’ so our first stop (as it was directly outside the hostel) was ‘Orioles singing in the willows’ park. As the name would suggest, it’s an area of walkways surrounded by weeping willow trees leading down to and around the East edge of West lake. The parkland is beautifully peaceful with the exception of a) a fuckload of people & b) the absolute nuisance minibuses which come careering down the path every couple of minutes carrying people that can’t be bothered to walk around the park and blaring out warnings in Chinese. These things really are a bloody menace and we saw more than one near miss as they just ploughed towards the crowd.

Near-misses aside, we headed south towards the Leifeng pagoda on a hill on the south bank. The approach took in small but slightly oddly formed Shuangtou bridge, notable not only for the sheer volume of people in attendance but also as a nice scenic spot for newlyweds to pose for pictures in front of the lake and pagoda (wedding pictures are taken a few days before the day itself) It’s also the spot the featured image at the top of the page was taken. Frustratingly the crowd swelled the closer we got to the pagoda and by the time we reached the entrance there were queues everywhere! For tickets, at security, for the toilets, for the escalator up the hill (!)

The Chinese aren’t a fan of stairs and this was further emphasised by the queue for the escalator to the 5th floor. We opted for the stairs and were treated to a multitude of sculptures, carvings, information displays and a window to the ruins of the original foundations for the original pagoda built over 2000 years ago. Anyone taking the lift seriously missed out!

Once we reached the top (using the stairs) it was a battle to find a viewing spot on the exterior balcony running right around but well worth the jostling given the sun was out and the view was glorious! Annoyingly my camera chose this point to stop working but you can get an idea of the backdrop from the below (one of the only non-choir ‘selfiles’ to which I’ve ever agreed!) The finger ‘v’ is an Asian thing which I;ve decided to appropriate for as many photos as I can while I’m in China (funnily enough a lot of friends over here have said they did the same initially, based on my research it should start wearing thin after about 2 months) 🙂

The following 4 days were spent exploring the sights and sounds around Hangzhou (mostly just the lake from different angles) and Leighton’s step counter let us know we covered around 70km in 3 days which would explain why one of my toes exploded on the second day (I’ll admit I may be overplaying that slightly, split is a more accurate definition but it’s nothing some plasters, cotton wool and a bandage couldn’t solve) Personal highlights of the trip for me involved walking the Su & Bai causeways (pedestrianised walkways running the length of the lake) going for a leisurely private boat ride on the lake Thursday morning (accompanied by a few plays of ‘I’m on a boat’ by lonely island) City God Temple (where, to appease the locals after the death of a well-respected justice minister at the hands of a local gang, said minister was promoted to from ‘minister’ to ‘God’ and therefore wasn’t dead) the the and rooftop beers at the Eudora station bar by the lake. Overall a cracking few days break and I’d defiantly recommend Hangzhou and West lake to anyone in the area. There’s some random pictures below for your viewing pleasure 🙂 Next big holiday will be in February for Chinese New year, I better get planning! 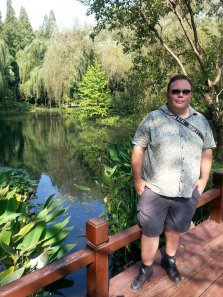 One of the many ponds scattered around the park grounds

Open the blinds! There’s a bloody great view out there!

Looking all moody an that. I’m soooo badass 😉

You can dress up as a Chinese princess and get your picture taken for 2 Rmb (about 20p) I thought about it but resisted the temptation!