I’m now 5 weeks and 80 additional working hours into the lesson planning project mentioned in my last post which has me effectively shackled to the desk and so I decided that for my next couple of days off I was in need of some serious leg-stretching exercise! Thankfully Ruian gladly provides in that respect in the shape of 2 good-sized but nicely accessible mountain parks: Longshan & Wansong. My self appointed tour-guide, school-appointed flatmate and long-time travel buddy Leighton and I tackled Longshan on my one day off last week and Wansong this week, with the weather Gods smiling on us and providing balmy 20-something days with a cooling breeze and clear skies despite being late October.

The entrance to Longshan park is marked by a sizeable temple, unmissable in the rows  of ramshackle corrugated iron huts which surround it. There was no-one there to greet visitors bar the barking dog out to the left and a handful of sleeping locals making use of the shaded benches to the right. On entering the temple you are met by a photo montage of what appears to be a visit to the park in the 60’s by the main man, Chairman Mao himself (although I’ve no idea what he’d be doing out Ruain way!) Upon scaling the inside of the temple the stairs lead you out of the back to a second concrete staircase leading out onto the ‘mountain’ (it’s more a big hill, there are proper bona fide mountains an hour of so out of the city which I plan on hitting at a later date) Following said staircase will lead you to a path which runs the circumference of the mountain, or you can carry on upwards to the pagoda at the summit. We chose the latter and after climbing for around 20 minutes we arrived at the peak (like a say, if it takes 20 minutes to scale, not a proper mountain!) there were some small sheltered benches scattered around. Taking a leaf from the locals at the base, we set up camp and sat for an hour listening to some music and I took the opportunity to be horizontal for a while and rest my leg muscles (20 minutes of stairs might not sound like a lot but after being spoilt by the outdoor escalator to the Leifeng pagoda in Hangzhou last month, they took their tole!) sadly you can’t climb the pagoda at the summit but it was a nice spot despite the foliage preventing us finding any viewpoints across the city.

After scaling the peak we followed the path around the mountain and were surprised to find (given the lack of any signage, or evidently, patrons) a dilapidated temple filled with brightly covered but dusty-as-feck 7-odd foot statues  and peeling wall murals; a low-budget ‘ghost cave’ filled entirely with mannequins in pound-shop horror masks that popped up in depressingly predictable manor and the genuinely depressing ‘animal park’ that saw a small selection of animals kept the most genuinely disturbing conditions I’ve ever seen. We left discussing if China has an equivalent of the RSPCA we could report what we’d seen to. Sadly, it appears they don’t, so we did what we could to drown our sorrows at the small but perfectly formed Taiyou tavern we found after making our way down.

Our trip this week to the more popular (and waaaaaaay larger) Wansong mountain park proved also to be far more rewarding although also much harder work. We walked there from the flat, stopping to investigate the most luxurious property sales office we’d ever seen (a three story luxury new-build house with private underground parking, private cinema, two gardens, balconies and self contained granny-flat on the third floor will set you back the bargain price of ￥4,000,000 or about £400,000) It took around an hour to reach the park so we took a well earned rest in the ground level park surrounding the entrance. As tends to be the case in China, there were sleeping locals scattered about the place despite the consonant buzz of passers by and the relentless honking of traffic horns (my least favourite aspect of life in China!)

Oblivious to the punishment that was to follow having been lulled into a false sense of security by Longshan the week before, I was keen to get going and take a look around. After a few minutes we reached the ‘free tea’ pagoda filled with locals sitting around watching TV and drinking the free tea provided by the monks. It was a great spot to chill for a while and watch the world go by despite being a little busy (free stuff will do that I guess)

After the free tea I was good to go and explore. My enthusiasm was short-lived however when I realised the size of the task at hand. The stairs went on for what felt like FOREVER. Every set we scaled had the look of the ‘last ones’ only for us to reach the platform and be met with another endless set of stairs reaching up and away as far as I could register. This went on for over and hour. OVER AND HOUR. OF JUST STAIRS. I didn’t take any photos as I didn’t need them, I’ll be seeing those stairs in nightmares for years to come such was the trauma of this climb. Eventually we did reach the summit and were greeted by the TV tower which overlooks the city of Ruian, surrounded by a huge fence inside the grounds of the residential complex which I assume houses the guy who looks after the antenna. The delivery drives must do rock-paper-scissors when that guy orders take-away cause walking’s the only way up! Once I’d got my breath back and finished cursing Leighton for suggesting this in the first place we went back down to the path which runs around roughly 2/3 of the way up the mountain and took a look around. Thankfully there were a a number of points which more than made up for all the f**king stairs.

Signposts directed us to the ‘Great Sage Palace’ A grandiose title for what was I’ve no doubt at one time a grandiose building. It’s still large, colourful, adorned with flags and housing a very cool giant marble yin & yang symbol in the floor but it sadly feels very much like a building whose best years a behind it. There’s a large stage, empty, abandoned bedrooms circling the main auditorium and a gift shop selling candles and incense (we accidentally work the guy we didn’t see sleeping in the corner but he was still kind enough to offer us some drinking water. I think he was just glad to see someone) 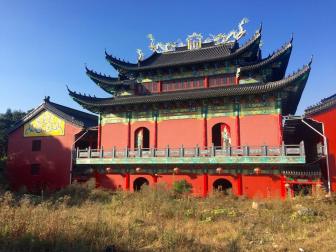 After the initial climb and then taking in the palace and the city-scape views offered by the mountain-circling walkway, we were both exhausted (were both getting on a bit at this point, the joints can’t cope like they used to) so we started on the long decent back to the crowded city streets and back to the desk. I think I’ve ticked the ‘stretch my legs’ box for the time being. I’m going for a lay down 🙂