Unfortunately I’ve been forced to bring my time in China to a rather abrupt end.

Over the course of the last week I’ve been subjected to a series of increasingly abusive messages from the new director of studies (DoS), Elsayed (or El-SiSi-ed as I now call him in tribute to the Egyptian dictator he’s modelling his management style on). This culminated in my being given a formal warning when I attempted to (as is my contractual right) raise a grievance process with HR. Our vice principal Nick refused to intervene despite my protestations and so I’m left with little alternative. In any authority position, if an employee comes to you with a complaint about bullying from their line manager, to respond with ‘you must only deal directly with your line manager’ is at best, naive, and at worst, downright moronic.

The upshot of this, my own personal catch 22; When I complained of bullying by my DoS, to my DoS, I got a formal warning for ‘inappropriate language’ and ‘being unprofessional to my direct line manager’ and when I complain to the vice principles directly I’m ‘breaking the chain of command’ (a fitting use of terminology by the new military-style regime) Basically, if you try and defend yourself from bullying in any way, we’ll use the school’s formal warnings system to beat you down again, regardless of which approach you take. It doesn’t matter where I am in the world or what my job is, I will not be bullied and I will not be intimidated when I haven’t done anything wrong.

So, what’s my crime in all this you may ask? Assault? Repeated absence? Showing up drunk? Nope, it’s not being able to get a document which is in storage on the other side of the world to China in under 2 weeks (ironically the school doesn’t even need it, they have all my required paperwork and I have my Z visa). You can see the message chain below, so rather than repeat it all here I’d advise you to read it yourselves and make your own mind up. The second message chain features my suddenly ‘illegal’ communication to Nick & Amy, the school’s vice principles, in which I request a meeting to discuss message chain 1. The response? ‘You must speak to your DOS’, then a formal warning from said DOS. Literally farcical. 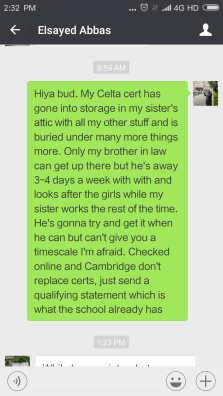 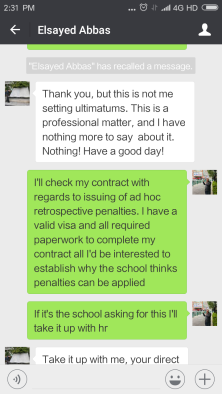 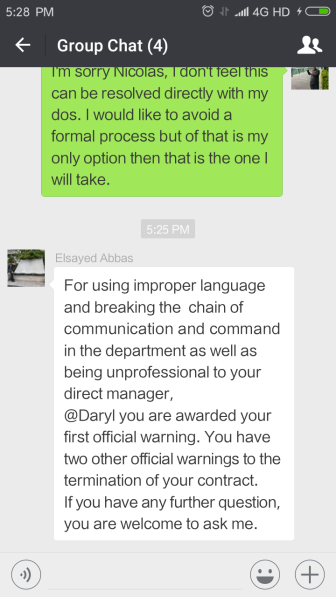 I’ve worked in organisations with bullies who get a stiffy from having a sniff of power before, and in the absence of strong leadership to reign them in them (clearly lacking in this instance) the only way to win, is not to play. This in mind, I’m going to take some time out to travel and then I’ll be heading back to the UK for some time catching up with family and friends.

I’m bitterly disappointed that it has come to this as I’ve greatly enjoyed my time in China, so much so that I’d recently taken the decision to sign a contract extension to stay for a second year (although in light of the above I’ve obviously had to radically alter that plan) It’s with a heavy heart that I must leave but due to the actions of one and the inaction of another I have little alternative. It almost goes without saying but to stress for clarity; the school is guilty of a spectacular failure of care.

To those of you who offered to come to my defence (and there were many) I appreciate your offers, but I don’t want to drag you into the firing line. I leave China with 8 months of incredible memories and with numerous new friends. Although in this case I’ve sadly not had the opportunity to say goodbye properly, I have no doubt our paths will cross again in the future and you can get me on wechat if you want to stay in touch. Best of luck to all of you. If my recent experience is anything to go by, I’m afraid you’re going to need it!

N.B. If you find yourself in a similar position and are looking for support, I would suggest contacting your country’s consulate in the first instance. You can also find help at :

and a list of English speaking lawyers in China at